1. Specify Which Forms to Use

Since there can be multiple templates for each type of form, you need to tell Landboss which ones to use before you can make your lease forms.  For each lease that you wish to make lease forms for, go to the Forms tab and choose the template you'd like to use for each form type, then click Save.

2. Choose the Lease or Leases to Merge

To generate forms for a single lease, go to the Forms tab for that lease and click the Make lease forms for this lease link.

To generate forms for multiple leases at once, click the Make lease forms button in the sub-nav menu in the sidebar at the right.  Then use the controls to locate and select the leases. 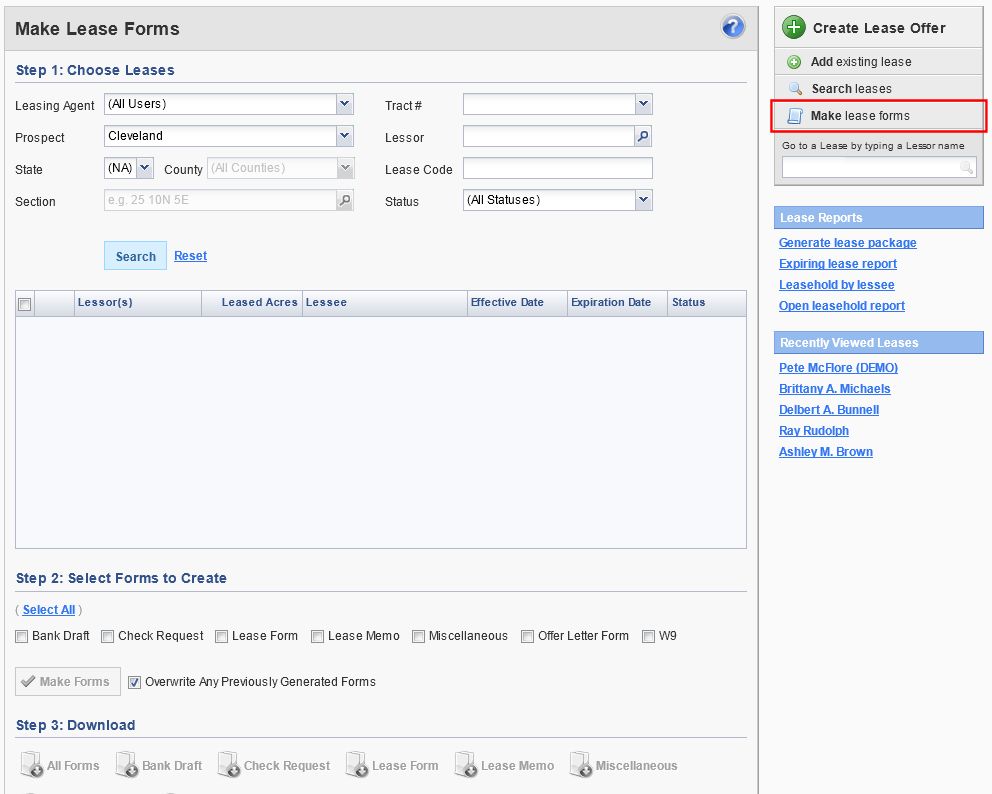 3. Select Which Forms to Create

Your next step is to specify which form types to generate.  If you are generating forms for a single lease, this will be done on the Make lease forms for this lease window, but notice that the bottom of the Make lease forms screen looks and works exactly the same.  The Overwrite Any Previously Generated Forms option can be used to automatically replace old lease forms of the same type on the Documents tab.  This is useful if you notice a mistake after generating a form and go back to correct it.  We recommend that you uncheck the checkbox if you are generating forms with a new set of terms, after negotiations have taken place for instance, so that you have a record of the old terms.  Finally, click the Make Forms button.

The generated lease forms will automatically be saved to the Documents tab for you, but you can download them directly by using the download buttons below the Make Forms button.  The All Forms button will give you a single Word document that includes all the form types for all of the leases.